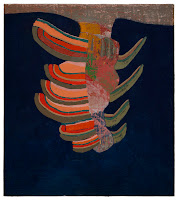 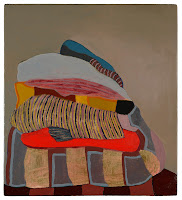 Can you briefly describe what you do?
I observe my world around me and let it just influence me in whatever way it happens – whether it’s personal, my kids, the house, the landscape, and neighborhoods around me. I think some of the titles reflect that.  So I guess the answer is that I just live my life, and then paint.
What drives you to make work?
I’ve been drawing and painting for as long as I can remember, and in abstract forms since high school. I love to paint with oil paint. At this time in my life, I’m glad to finally have 4-5 hours a day now. My kids are in school long enough for me to prepare and get focused, and then get to work on several panels. For a few years, I couldn’t paint at all, so this year has been very productive.
I think what’s made a big difference now is that I can accelerate more deeply into a creative development, produce more paintings, and then see how they come out sooner. When I see something start to emerge, it drives me to go further with it, which then leads me into the next development. I have a lot more creative momentum now then a few years ago, and that drives me to do more.
Can you tell me something of your day-to-day working practices?
After I drop off my kids at school, I come back home to my studio and move a few things around to see which painting is going to get the most attention. I will usually work straight from 9:00 to 11:00 then take a break before returning to work until 12:30. I have my works-in-progress hung all around my house, so I am always looking and thinking about what I’m going to do next, or what I might paint over. After the kids are asleep around 8:00, I do another session until about 11:00 or midnight.
How long have you been working in that way?
This is my first year with the kids in school for nearly a full day. In 2009, it was hard to organize my studio time. The kids were so young, and they were always getting sick and missing preschool.
My current studio schedule is working well for me now. I miss painting until 2-3:00 in the morning, but I know I will again someday.
Which artists have had the greatest affect on your work?
Elisabeth Cummings, Alice Neel, Eva Hesse, Balthus, Chaim Soutine, Philip Guston, Lucian Freud, Marsden Hartley, Matisse.
What, outside of visual art, informs your practice?
My work is mostly a reflection of internal experiences or situations – not single events per se, more like what is happening to me over a year or a few months. If you were to look at any one of my works from the past three years, I could probably tell you exactly what was happening in my life, and what was happening in my relationships with my kids, family, my life, and so on.
How would you like people to engage with your work?
I don’t have any mindset ahead of time about how I want people to engage with my work. I don’t feel self-conscious about what I make as though I’m trying to get into them in a particular way.
I also think my work is sensual, but not in an in-your-face kind of way. There are sometimes sexual shapes in there, but I’m not trying to make a statement about sex or femininity on purpose. If that’s what people think when they view my work, that’s fine, but it’s not my message.
Have you seen anything recently that has made an impression?
Farrell Brickhouse’s paintings at John Davis Gallery; Matt Tiernan’s paintings from a group show we were in. I loved them.
Not very recent but the Matisse show at the MOMA this past summer.
Do you have anything exciting on the horizon?
I will be in the next issue of the Stone Canoe Journal, published by Syracuse University, and there will be an opening at XL Projects in Syracuse, NY on Feb 12.
3 comments: 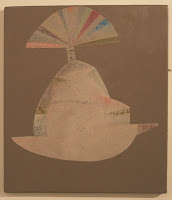 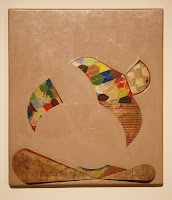 Can you briefly describe what you do?
What drives you to make work?
Can you tell me something of your day-to-day working practices?

How long have you been working in that way?
Which artists have had the greatest affect on your work?
What, outside visual art, informs your practice?
How would you like people to engage with your work?
Have you seen anything recently that has made an impression?
Do you have anything exciting on the horizon?
No comments:

a one-size-fits-all interview with a straightforward approach and a simple aim.